Heroes 3.5: In the Wake of Gods Portal > Heroes of Might and Magic: Quest for the Dragon Bone Staff (PS2)

Heroes of Might and Magic: Quest for the Dragon Bone Staff (PS2)

Finally, after such a very long time, I managed to run this PS2 exclusivity using an emulator. My enthusiasm waned with the first fight, when the game slowed down terribly. I’m going to have to figure out what happened.

Heroes of Might and Magic: Quest for the Dragon Bone Staff is a 2001 video game released on the PlayStation 2. Though 3DO did not advertise it as such, the game is an enhanced remake of King’s Bounty. It is primarily a graphics enhancement and it appears that little of the text has changed. Because of its dated gameplay, the game bears little relation to the rest of the Heroes of Might and Magic series.

The game received “mixed” reviews according to the review aggregation website Metacritic. Daniel Erickson of NextGen said that the game was “Not as deep as the PC series it’s named after, but just as fun and much more accessible.”

The classic turn-based gameplay established by the Might and Magic series comes to the PlayStation 2 in this release, complete with graphical enhancements and new features designed to make good use of the console’s power. Players choose a hero to lead across the land on a quest to smite evil, gain power, and recover an immensely powerful artifact known as the “Dragon Bone Staff.” In a blend of RPG and strategy elements familiar to veterans of the game’s many incarnations on the PC, the player may choose to lead his army on side adventures to defeat wanted criminals or to recruit powerful allies, always watching for clues to the location of the elusive Dragon Bone Staff along the way. When the relic is finally found, the chances are slim that it will be unguarded. The secrets gleaned and skills gained on the quest that leads the hero to the staff may also decide the victor of the final battle. 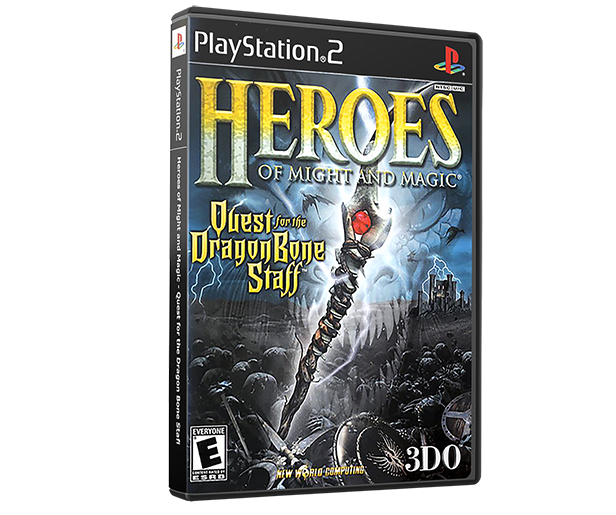