Heroes 3.5: In the Wake of Gods Portal > Heroes 3 Demo download

Heroes of Might and Magic III is a turn-based strategic war game, set up in a classical role-playing game environment. It involves capturing and developing towns, gathering resources, assembling armies and sending them into combat. Each town has a theme and can only raise the type of creatures appropriate to that theme.

The resources (gold, wood, ore, gems, crystal, mercury, and sulfur) can be found mostly in mines and are gathered once a day. They are used to build new buildings in your towns, to improve existing buildings, to buy armies, etc. Each army is led by a hero and consists of up to seven stacks of creatures raised in towns or recruited in countryside. The armies are sent into tactical combat, which can occur either in countryside or in towns. If the attacker captures the town, the winner can recruit the creatures raised in that town afterwards.

Works without problems on Windows 10. In Heroes 3, you control the actions of heroes to complete mission objectives in a variety of conflicts taking place in the mythical land of Erathia. As heroes travel across the land with their armies, they can explore, seek artifacts, and find treasure, as well as lead their armies into battle.

Towns can also have armies garrisoned for their defense and act as centers for recruitment, the learning of magic spells, and trading. Towns you conquer become part of your territory. You may develop your towns to provide yourself with offensive, defensive, and logistical advantages. This demo of Heroes of Might & Magic III will expire after 28 turns (about four weeks). 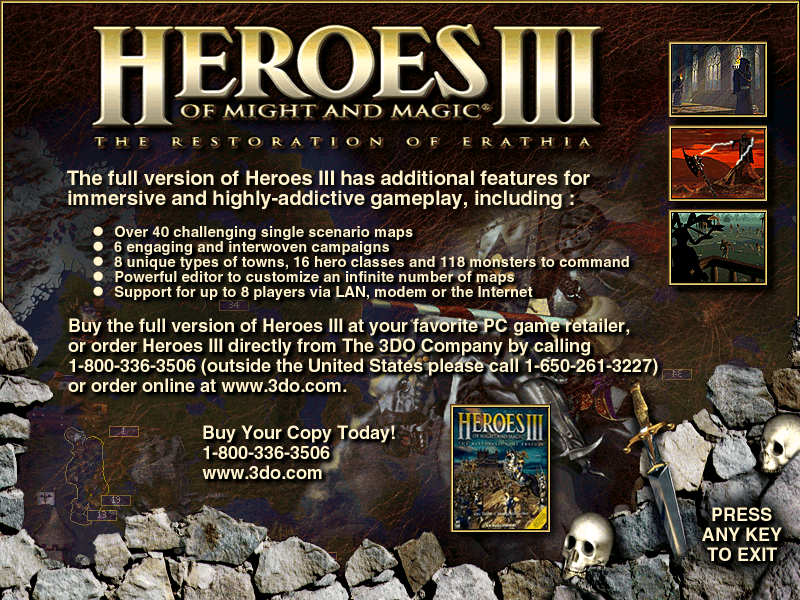