Heroes 3.5: In the Wake of Gods Portal > Horn of the Abyss v1.6.0 with Factory wasteland terrain!

Horn of the Abyss v1.6.0 with Factory wasteland terrain!

As announced earlier, the next Horn of the Abyss update is the version 1.6.0, which is live now. In this article, we will cover the main additions and changes in the 1.6.0 update. But first things first, let’s premise it with the following:

The 1.7.0 update with the new Factory town does not and cannot have a scheduled release date, however, the development is chugging along, and in January, you can expect another major news article where several new units from the lineup will be announced.

Obviously, as a non-commercial project, our manpower is limited, and we don’t always have enough of it readily available to keep the development pace steady. At the moment, we could use help from advanced 3D artists and animators. Those wishing to participate in the development of HotA can contact me directly by messaging Docent Picolan in the VK group contacts, or through e-mail: hotacrew@gmail.com.

Avid online players and stream viewers know that the guards of Experimental Shops have long been scarce challenge on the way to the reward. Shop tactics everyone knows by heart by now allow players to get Giants for their armies without suffering any losses, even with a very modest army. In the case of Harpies, the task is further reduced to simple click-through. The only resource required for success is time, as battles get drawn out to last dozens, sometimes hundreds of rounds. The 1.6.0 update introduces a range of solutions to deal with the problem once and for all.

First off, a brand new unit, the neutral Steel Golem, is introduced to replace the Tower’s Iron Golems in the Shops guard. 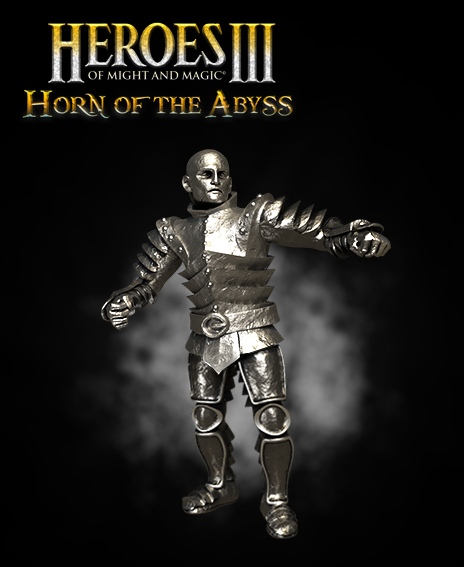 Back in March last year, in update 1.5.2, the mechanics of the Resistance skill were changed to solve balance problems. Instead of a chance to resist a spell, it was made to reduce the opponent’s Spellpower. Directly replacing an element of the original game with a new one is not typical for HotA, but it was sufficient as a temporary measure. In 1.6.0 update, the new mechanics will be added as a brand new Interference skill.

Three new artifacts will be added to decrease the opponent’s Spellpower (no combination), with altered percentages and changed inventory slots:
Plate of Dying Light – Torso slot. Decreases the Spellpower of the enemy hero by 25% in combat. Relic, cost: 10,000.

Charm of Eclipse – Miscellaneous slot. Decreases the Spellpower of the enemy hero by 10% in combat. Minor, cost: 5000.

Seal of Sunset – Ring slot. Decreases the Spellpower of the enemy hero by 10% in combat. Minor, cost: 5000.

The Rampart heroes are joined by a Giselle, an Interference specialist. Her bio:

A fair took place once in the village where Giselle lived. An old druid from a nearby grove agreed to show the villagers a few simple magic tricks. Nothing he tried seemed to work out, but the old man was able to accurately pinpoint the grinning girl in the front row as the cause of his woes.

The biggest addition in the version 1.6.0 by the sheer volume of visual content will be a new terrain, the Wasteland. We shall touch upon it last, as some information, along with early screenshots, have already been published in previous publications. Still, the terrain has changed considerably since, as all necessary tile textures have been finished, a significant number of new decor created, the soundtrack composed, interactive objects added, and the battlefield with its obstacles finished. 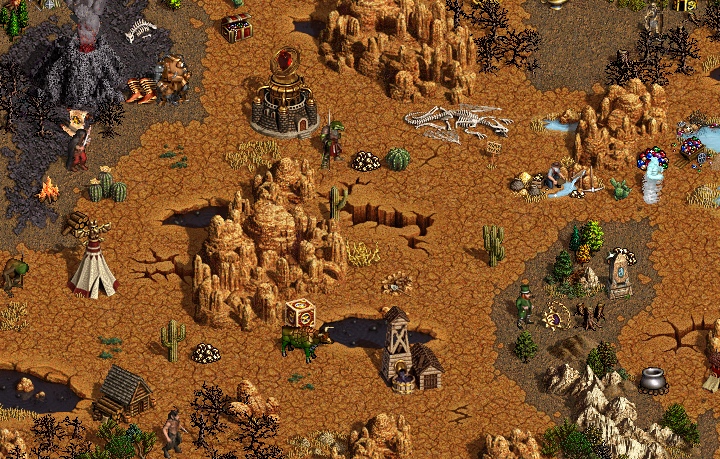 Here goes the full description of the Wasteland objects:

Warlock’s Lab – Allows players to transmute mercury, sulfur, crystals and gems into each other at the ratio of 1 to 1. RMG value is 3000, frequency is 100, generated on Snow and Wasteland, no more than one per zone

Prospector – Yields 500 gold or 5 sulfur once a week. RMG value is 500, frequency is 30, generated on Wasteland

Trailblazer – Reduces the movement penalty for Wasteland by 50%. RMG value is 200, frequency is 40, generated on Wasteland, no more than one per zone

Grave – When dug up, yields 500-5000 gold, or a random treasure/minor class artifact, and gives -3 to morale until the next battle. RMG value is 500, frequency is 30, generated on Wasteland

Horn of the Abyss 1.6.0 full changelog

SoD Bugs
[-] The option to switch to the underworld in the world view on single level maps has been removed
[+] A bug has been fixed where, when ordering a hero to move across terrain types using the keyboard arrows, the hoof clatter soundbite would keep playing
[+] Certain animation flaws in online play have been fixed
[+] A bug has been fixed where translucent image elements in combat could turn black
[+] Keystone Tents and artifacts wanted by Seer Huts now cannot be generated beyond Border Guard on random maps

Map Editor
[+] The Arena map mode which allows users to create maps targeted at a single battle between the players, with preparations
[+] The option to customize the level, reward artifacts, and the presence or absence of an upgraded stack in creature banks has been introduced
[+] The following settings for monsters in the Map Editor have been introduced: the exact mood, whether the monsters are willing joining for money only, the percentage of monsters to join, the number of stacks into which the monsters are divided, the presence of an upgraded stack
[+] Local Events can now be set to be triggered independently by human and AI players
[+] A new object, the Quest Gate, has been introduced; it requires players to complete a quest to be granted passage and does not disappear after a visit; for quests that require payment, it will be due at each pass
[+] Two new quest types for Seer Hut / Quest Guard / Quest Gate have been introduced: “Belong to a class” and “Return not before date”
[+] An option to set multiple quests per Seer Hut has been introduced as a sequence of quests or a recurring sequence of quests
[+] Scaling in the object pane has been improved
[+] The restriction of no more than 256 monsters with messages per map has been removed
[+] Map verification now takes into account the option to assemble/disassemble set artifacts when checking for the existence of an artifact needed in a quest
[-] Freezing when generating a random map on some systems has been fixed

Template Editor
[+] Town type selection setting has been introduced, allowing the generator to set the town type in a zone depending on the towns in other zones
[+] Such settings as monster mood selection, willingness to join for money only and joining percentage have been introduced
[-] Zone editing interface has been changed
[+] Dark interface skin has been introduced
[-] Errors when working with parallel connections have been fixed
[-] A bug has been fixed where Golden and Diamond Golems were absent
[-] Windows XP compatibility has been brought back

Miscellaneous
[+] New maps The Great Wasteland, Gold Rush have been introduced
[+] When using the terrain brush in the map editor, or during map generation, identical tiles no longer spawn next to each other
[-] On random maps, Ancient lamps can now only be generated on sand and snow, value 5000, frequency 200
[+] On RoE maps, random towns can now be Conflux and Cove
[-] Numerous fixes to maps and texts