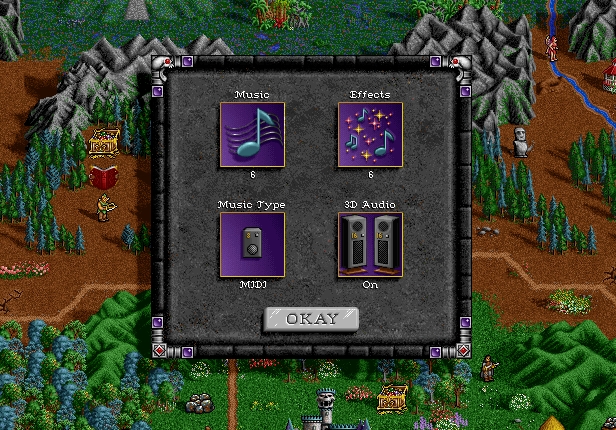 In the new fheroes2 version team reworked the whole source code related to audio. The first major change is that specific music tracks resume from the places where they were stopped, exactly how it is in the original game!

For now this feature works only for External type of music such as OGG, FLAC and MP3 files, but we will expand it to MIDI tracks in the near future. 3D Audio feature for objects on the map. Put your headphones on, walk your hero nearby a river or mine to feel the depth of sound!

Team improved some graphical features of the game. Did you notice that Knight and Wizard castles’ always have light blue flags? Now these flags have the same color as the owner of the castle. With the power of the engine they were able to fix Red Tower in Sorceress castle. The original resources contain an image, that lack some parts of the structure.

And here is another example where the original resources were incorrect: captain’s quarters icon in Sorceress castle. The team fixed High Scores for campaign, closed many issues with spells, updated multiple existing translations and added Belarusian, Spanish and Swedish languages support. As usual we fixed more than 40 bugs since the last release.

Installation:
You need Heroes 2 GOLD form GOG.
Copy the subdirectories ‘ANIM’, ‘DATA’, ‘MAPS’ and ‘MUSIC’ (some of them may be missing depending on the version of the original game) from the original game directory to the fheroes2 installation directory. Done. Run fheroes2.exe.