Heroes 3.5: In the Wake of Gods Portal > Earthquake can destroy an entire stack of creatures – Did you know nr. 106 – Heroes 3 Complete

Earthquake can destroy an entire stack of creatures – Did you know nr. 106 – Heroes 3 Complete 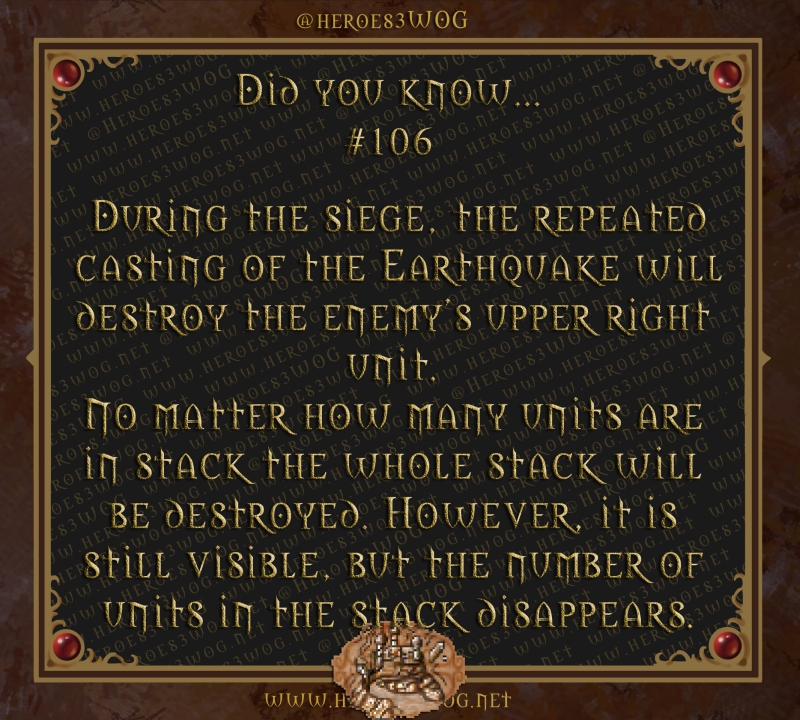 During the siege, the repeated casting of the Earthquake spell will destroy the enemy’s upper right unit.

No matter how many units are in stack the whole stack will be destroyed. However, it is still visible, but the number of units in the stack disappears. You can attack such a unit, you even get a retaliatory attack from it, but the AI skips its move.

This usually happens when the Earthquake spell is cast for the second or third time. It is no longer possible to destroy other units in this way.

Explanation of why this is happening by Machberet: If an Earthquake destroys a shooting tower, the game shifts a ‘tower’ flag to the first unit so it becomes a ‘shooting tower’. It can no longer attack. If you kill all other creatures, the game considers this to be a ‘tower’, not a creature, so it decides the battle has been lost.