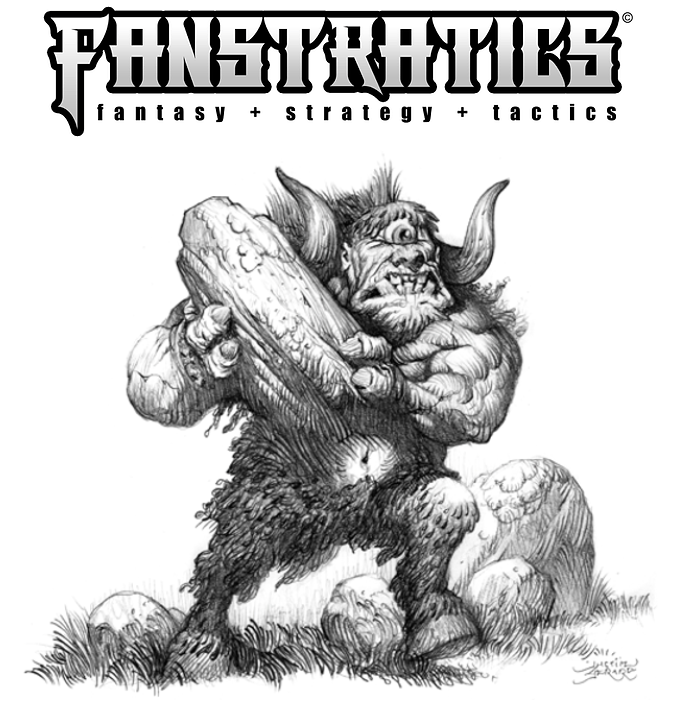 Truly the anchor of Chimeran army power, the mighty Cyclops Siege Breaker has the ability to throw large boulders the length of any Battlefield. This makes them a powerful ranged Troop, and better than any Catapult when it comes to destroying Enemy Siege Walls.

Over time, the Cyclops as a mythological creature, has gone from a one-eyed giant to a one-eyed monster. In popular culture this is due mostly to Ray Harryhausen and his work on the movie The 7th Voyage of Sinbad. As I have mentioned in previous interviews, it is often better to embrace a stereotype, than attempt to redefine it. With lesser, relatively unknown Troops, such as the Gatorkin Castor, you have a lot of room to play around with the conceptualization, and this is arguably easier than working within popular known constraints.

With a Cyclops, people have a general idea as to their appearance. Working against these notions can often be counterproductive. So, when it came to the Cyclops Siege Breaker, I pointed Justin toward the Ray Harryhausen Cyclops and reiterated the Fanstratics mantra, “Something different, but familiar.”

Games have come a long way since 1999, and while they are not necessarily easer… they are friendlier. To this end, Fanstratics will be modern in its approach to player/program interactions. This mean incorporating Quality of Life, HD+, and HotA Efficiencies. For example…

Bottom line… I’m not ignoring HoMM3 in its current state. If I find a mod feature to be compelling, I’d be foolish to ignore it.

At the start of November, I began preliminary work with a couple of artists to produce an ‘artistic mock-up’ of the Fanstratics Adventure Map.  For those who don’t know, an art ‘mock-up’ is an art test.  Overall, the goal is to assemble a small collection of art assets, in the game engine, to prove or disprove basic assumptions about how the game will look.  For Fanstratics, this is especially important, as we are attempting to utilize a forced perspective to replicate the HoMM3 look across three different environments: Adventure Map, Townscape, and Battlefield.

About a week after we started, the artists realized they had been too optimistic in their work assessment, and were unable to take on the extra duties.  A few days after they left the project, as I was about to reach out to other artists… I began to feel ill.  Yep… COVID… again.  While the symptoms haven’t been as severe as last year, they are eerily familiar.  As of this writing, I am entering week three, and my productivity has suffered.

Because of this setback, the ‘art mock-up’ I had planned for January 1st… has been delayed.  At this point, my goal is to share the work sometime in the first quarter of next year (fingers crossed).  Assuming we can nail it down, we will then move onto the Townscape and Battlefield.  Once all three environments are complete, with some degree of program functionality, we can begin thinking about ‘next steps’.