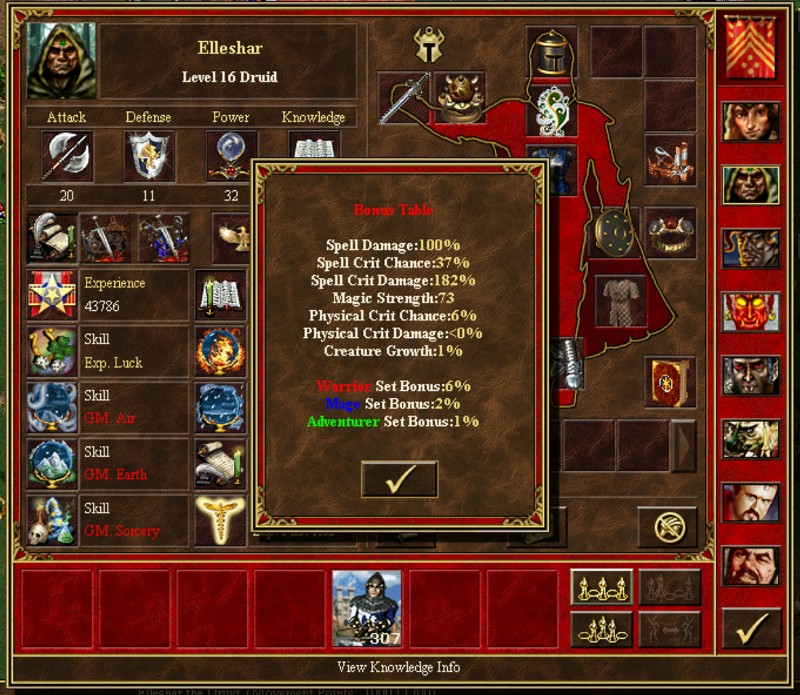 Advanced Classes Mod, a gameplay enhancing mod, that features revamped skill and spell systems, new artifacts and artifacts set, 2 dozens of new and reworked specialities, 6 new subclasses with uniquw abilities and more. The idea of this mod was to create 2 new skill ranks — Master and Grandmaster, which are gained right after Expert rank, as well as a completely new hero class — adventurer.

We have high-quality translation into Russian language by Daemon_n, improved AI-handling of artifacts, reworked Fire-Shield mechanics, plenty of improved and changed artifacts, restructured mod files, new helpful tavern rumors, Horn of the Abyss like description for buff/debuff specialists, increased Luck cap, an epic new Dragon Set bonus and many more balance changes and fixes. First of all, let me thank Daemon_n for his huge effort to the Russian community with his translation. It was not an easy task I can tell you! 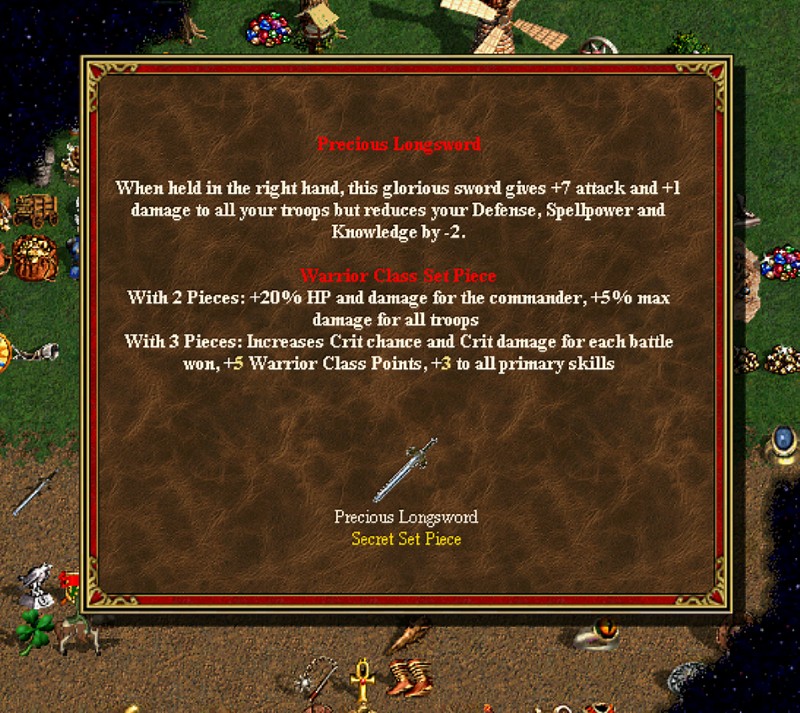 Now, why the Fire-Shield rework?

Tried to greatly improve the fun and use of Fire Shield spell. The problem with that spell was that it actually required your troops to take damage to have any usefulness, also it was very difficult to calculate the reflected damage because it also depends on attack and defense value of the hero. Also, several creatures which should be immune to Fire Shield damage were not.

The new Fire Shield now is more like a spell and the damage depends on the spell power of your hero. The new formula for reflected damage is: 10% of melee damage +10*SP+25 with no magic school. Sorcery, Fire Magic, Orb of Fire, Resistance, Protection from Fire all in the damage formula now.  Also, several creatures are now completely immune to Fire Shield, like Black Dragons.

These changes make the spell much more useful early on and it is not so big pain to fight Effret-Sultans anymore. Remember it is a level 4 spell now.

New AI-Artifact equipment Mod included. The computer player will now always try to equip the best artifact for slots. In case you didnt know, the AI would never equip an Titan’s Gladius if his hand slot is already blocked by Centaur Axe, thus wasting a lot of potential with artifacts. This mod alone can make AI a much harder challenger.

Further, I changed the First Aid tent ressurection capabilities by limiting the amount of troops that can be resurrected during battle to 5% of total army HP. This will effectively deny the abuse of First Aid tent heal which we have since WoG introduced it.

In this version you will find several artifacts changed in their class. You ever wondered how a Diplomat’s Ring or Eversmoking Ring of Sulfur are considered Major Artifacts? Or the Boots of Speed are only Minor class? Well not anymore, a change needed which should have been done long ago. Check documentation for more info.

– A complete and high-quality translation into the Russian language by Daemon_n now available!
– merged and restructured erm and help files, now its cleaner and easier to work with
– 75% of all in-game text and messages are now located in a separate language .json file, which makes for “easier” translation (except spell and artifact description)
– changed font color to better match H3 art style
– added my AI-Artifact equipment mod (finally AI will now always equip best artifact for most slots)
– reworked Fire-Shield mechanics (completely rewrote the damage calculation, now the reflected damage scales with Spell Power, in gerneral it now works as if should have when the game was released)
– First Aid Tent heal in combat now has a capacity from max 5% of army value, after that resurrection ability is exhausted  (to avoid endless First Aid tent resurrect abuse in combat)
– implemented Misfortune script from ERA scripts (four artifacts received negative Luck as attribute also increased max Luck cap from 3 (12,5% chance) to 5 (15% chance))
– added new Tavern rumors which give helpful tips about Advanced Classes Mod
– Magic Strength scaling factor for big and small maps (XXL-Maps 80%, XL-Maps 85%, L-Maps 100, M-Map 110% S-Maps 120%, this ensures somewhat similar power of spells on all map sizes)
– Bonus Table in hero screen moved from alt+LMB to CTRL+RMB
– Bonus for class sets now show in Bonus Table screen and more information
– Buff/Debuff specialists icon click now shows exact strength of spell per creature level (like in HotA, just better)
– changed the class and cost of several artifacts to better match their actual usefulness (no more snowty artifacts in Major category for example)
– added version check for ERA 2.88 at gamestart
– Plunder ability when attacking monsters now works again but only for GM-Adventurer
– Brute now gets a smoother scaling for damage to gold conversion +2% gold per commander level [100% at level 1… and 200% at level 50]
– little adjustment in Magic Strength (overall a little nerf, because double cast is huge bonus, and restored the map penalties for big maps again)
– Scouting event that gives creatures now cannot give lvl 7 or 8 creatures in the first two weeks
– The option with increases units stats per gameday now calculates HP more accurate for low level troops and doesn’t start with +1 modifier by default
(so if you set to increase stats by 5% per week it will only start after one week) also changed from +6.66% to 5%
– Battlemage Pre-Cast ability costs no spell points and removed Ice Ring, Armageddon, Chain Lightning
– Commander specialists now also can gain extra strike for shooting and not only melee
– now Aeris also starts with some Pegasi
– now when sets equipped the effect of the “stronger” spell shows in Spell Book aswell
– now Hunters can learn Diplomacy at Master and BM can learn Eagle Eye at Master and Druids can learn Nobility at Master (to avoid confusion)
– disabling extra Ressource message pick up with Estate
– increased compatibility with Replay Battle Plugin

– fix Toggle between spell casting/melee/shooting now also works for Brute and Astral Spirit
– fix with critical strike for neutrals in combination with class sets, now also works with retaliation
– fix with Angelic Alliance Set, it would reduce your Prayer Spell by 2 points when used and moral now at 5 pieces and not 6
– fix with Battle Mages War Dress Set Bloodlust Spell was reduced by 4 points when dressed and used in combat
– fix GM. Adventurer Growth only worked for Red player
– fix a typo in AI difficulty mod which could make the game a bit harder than intendet