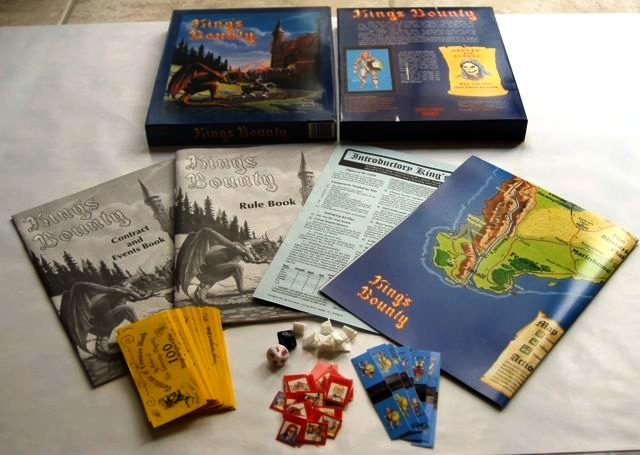 Believe it or not, King’s Bounty board game really does exist. It’s a game from 1991, so buying it is really hard, you can try eBay, but there’s a price of around $ 100. But it’s a really pleasant surprise that NWC also made a board game for its digital game.

It’s a pity they didn’t continue and we didn’t see the table version of Heroes of Might and Magic sooner. But don’t worry, the Heroes III: The board game campaign starts in November 2022.

Released in 1991 by Task Force Games, King’s Bounty resembles its like-named 1990 computer game counterpart from New World Computing: the players are rival bounty hunters, each riding through the kingdom, hunting down monsters and other miscreants upon whose heads the king has put a prize. Despite the release dates, the board game was actually designed prior to the computer game.

The turn-based computer game’s origin began with fighting mechanics that were meant to have a similar flavor to Avalon Hill’s Titan, but the program lacked a story-line and theme. Meanwhile, development of the King’s Bounty board game was wrapping up under the working title of “Bounty Hunter.” New World Computing, which owned Task Force Games at the time, decided to have the computer game adopt a storyline and theme similar to that of the board game.

The computer game, designed by Jon Van Caneghem, is notably considered the forerunner of the Heroes of Might and Magic series of computer and video games. A sequel to the original computer game, called King’s Bounty: The Legend, was released in 2008.