Heroes 3.5: In the Wake of Gods Portal > HoMM3: The Board Game – Deckbuilding Explained

HoMM3: The Board Game – Deckbuilding Explained 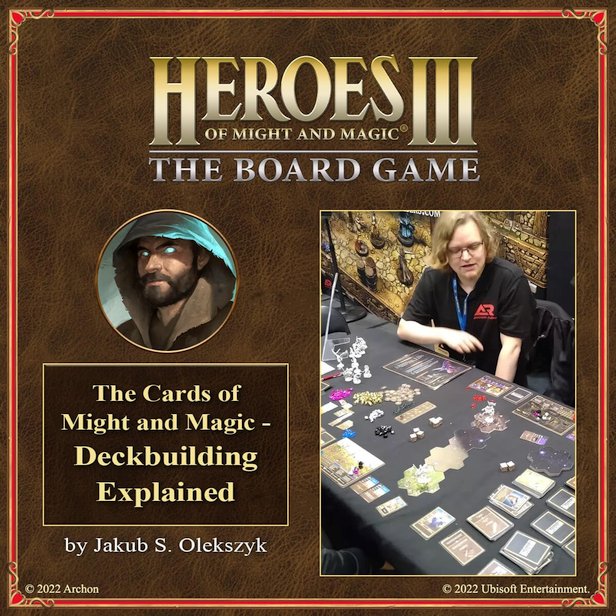 The cult-classic Heroes of Might and Magic III is a computer game full of diverse factions. Do you prefer the strength and solidity of the Castle or the wizarding tricks of the Dungeon? Or maybe you like the approach of Sandro and his Necropolis the most – Where others see peasants, I see an opportunity?

The factions, however, are only the beginning; after deciding on one of them, the player has to choose a hero. Here is another pleasant dilemma – to play the hero of Might or the hero of Magic? Which specialization should you choose? There are many other elements during the course of the game – leveling the hero, speccing your ability tree, choosing artifacts and obtaining the desired spells, and of course, maintaining high morale in the army…

Deckbuilding is our Grail

As the creators of the table-top version of Heroes III, we faced the very real challenge of converting the above-mentioned key elements of the original into efficient mechanics of the board game. We searched for a long time, and the pieces of the puzzle were slowly revealed, but the picture was still unclear. In the end, we decided to hire another hero – Alex – who helped us find our Grail – deckbuilding.

The hero screen made to match table-top

The deckbuilding mechanics have become the hero screen of our board game. Here we have managed to include everything in a convenient and intuitive system. The main hero starts the game with a specific deck of Might and Magic. Their Attack, Defense, Knowledge, and Power statistics have been converted into the number of cards in the initial deck, thanks to which the player can modify the statistics of their units during combat or increase the spells’ effectiveness. It’s the same with specialization – each hero has at their disposal unique cards, which – just like in the original – strengthen units or skills or expand the hero’s spell pool.

As the game progresses, the deck expands – it becomes more Mighty or more Magical; it is here that the artifacts, spells, and abilities acquired by the hero appear.

The whole mechanic is connected with the hero’s experience system – their level determines how many cards the player can have in their hand and how many cards they can play on an expert level. When advancing to most levels, the hero gains skill cards, and on certain levels, they strengthen their deck with more specialization cards.

The additional charm that the cards of Might and Magic add is their diversity – despite their consistency and same card back. First of all, in all cards, we distinguish instant effects – those that work immediately, and ongoing effects – the effect of which lasts until the end of a player’s turn or combat round.

Second, many cards have two alternate actions to choose from.

It is also impossible not to mention the possibility of playing a card at the basic level for a weaker effect or at the expert level with a stronger effect (cards at the expert level can only be used 1-3 per turn, depending on the hero’s experience level). Finally, spell cards can also be played in a variety of ways. Spells in the base power range – from the weakest effect – can be cast by any hero; however, Power cards are required to enhance the card’s effect. Thus, a regular Magic Arrow can deal from 1 to 3 damage!

…The gameplay of the original Heroes III is essentially condensed into these three screens… I think we put it really well in the board game. Inevitably – it is different than in the video game, which does not change the fact that everything works as it should. We have dedicated the previous blog post Why do map tiles matter? to our adventure screen; there will be another post about the combat screen. In the meantime, check out our deckbuilding hero screen. Yes, yes, it cannot be denied that other games also have deckbuilding… but only with us will you find the unique deckbuilding of Might and Magic! – by Jakub S. Olekszyk