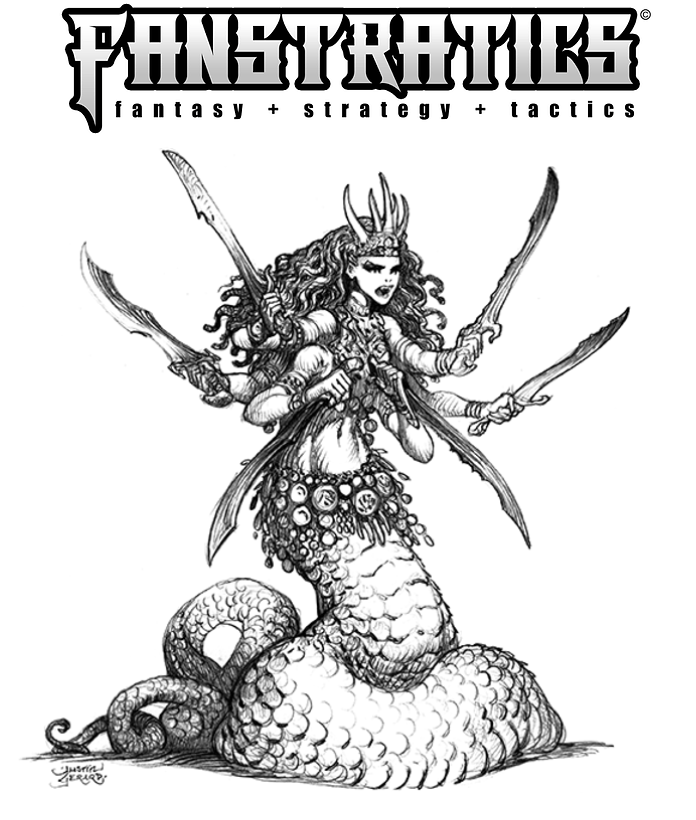 If the Medusa is considered a femme fatale, who can turn a Troop into stone, the Naga Blade Dancer is a terrifying beauty who can dismember a troop into several pieces… before they draw their final breath.  Nagas are an offensive powerhouse, using a ballet of blades, to nullify the Retaliation ability of Enemy Troops.  When engaged, Enemy Troops can only endure, and wait for their turn to strike.  Inexperienced Troops, from a lesser tier, are naturally more vulnerable to the Blade Dancer’s dominating assault.

When we started work on this Troop, one of the first things I mentioned to Justin was, “The Naga is something of a fan favorite. For her, I’d like to stay relatively close to home.” After all, I was also a fan of the Naga. Two rounds of thumbnails later, we adjusted the positioning of her tail, but kept how her arms were arranged.  She is indeed a terrifying beauty. Looking forward to her eventual render.

For those of you who want to see Justin create the Naga Blade Dancer drawing, you can always watch a Twitch stream.

Fanstratics Question: Will each faction have a main race like in Heroes 5?  If so, what is the proportion of the main race in the lineup?

While a Faction’s organization can appear to be racial in nature, in truth, each Faction is structured around a loose cultural or religious theme.  For instance, while the majority of the Allegiant Troops are human, it is not a strictly human faction.  It has the Archangel, along with a couple of other non-human Troops (to be named later).  So, to directly answer your question, “No.”  Each Faction does not have a ‘main race’, but some Factions may ‘appear’ to have a strong racial theme.