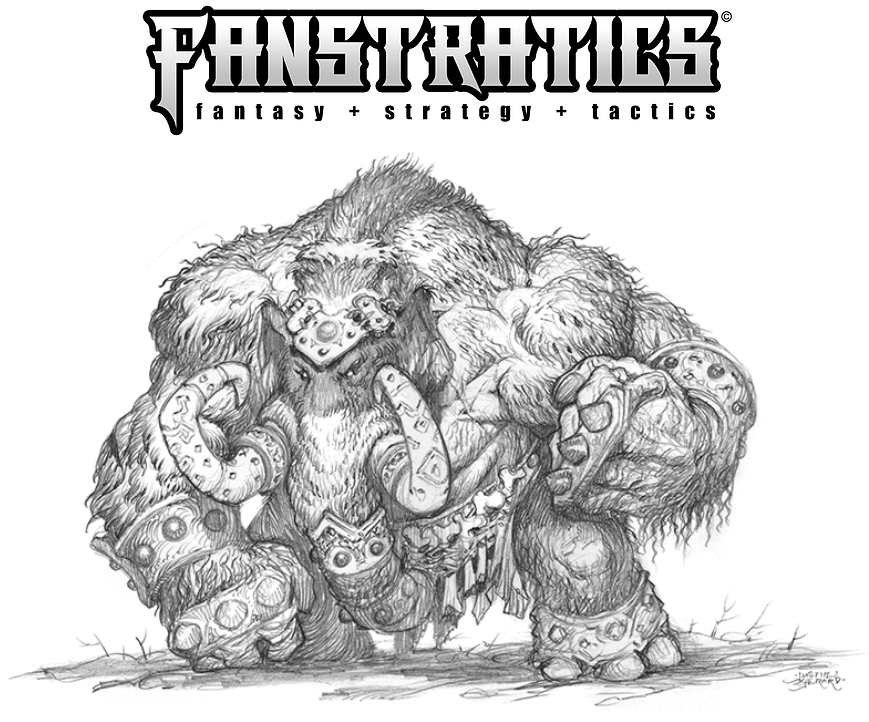 No other Troop enjoys up close and personal melee combat more than the Mammoth Bone Crusher. Disgusted with the idea of traditional weaponry, their iron ‘knuckle dusters’ give additional mass and momentum to their assaults, while serving to protect their heavy hands. In their presence, few opponents can mount a sustainable defense.

Just as Fanstratics (FST) has Factional parallels to Heroes 3, FST also has Troop parallels. When it came to replacing the Behemoth, I needed a massive monster embodying brute force. My first thought was ‘elephant’. My second thought was ‘mammoth’. My third though was, “This one’s going to be a lot of fun.”

Once again, Justin nailed it. For those of you who want to see him actually render the drawing, you can watch a Twitch stream.

While this is another old and somewhat logical idea, I am a touch embarrassed to admit it didn’t occur to me until I started preliminary work on HoMM4. Initially my thoughts were… ‘more war machines… different war machines’. After thinking it through, the concept quickly evolved into ‘Battlefield Artifacts’.

While War Machines are the Ammo Cart, Ballista, Catapult, and Medical Tent… Battlefield Artifacts are unique. Their individual effects only trigger when specific conditions are met on the Battlefield.

Please keep in mind, this particular feature is a work in progress, and if the result isn’t as envisioned… it will be removed. In my brainstorming for Fanstratics, I have created numerous Hero Attributes, Hero Skills, Hero Spells, Troop Attributes, and various Artifacts. When one of the aforementioned doesn’t ‘make the cut’, I try to work it into the game as a Battlefield Artifact.