ERA 3 Launcher will help you quickly install and run these 3 modifications: In the Wake of Gods (WoG/ERA), Horn of the Abyss (HotA) and Master of Puppets (MoP). 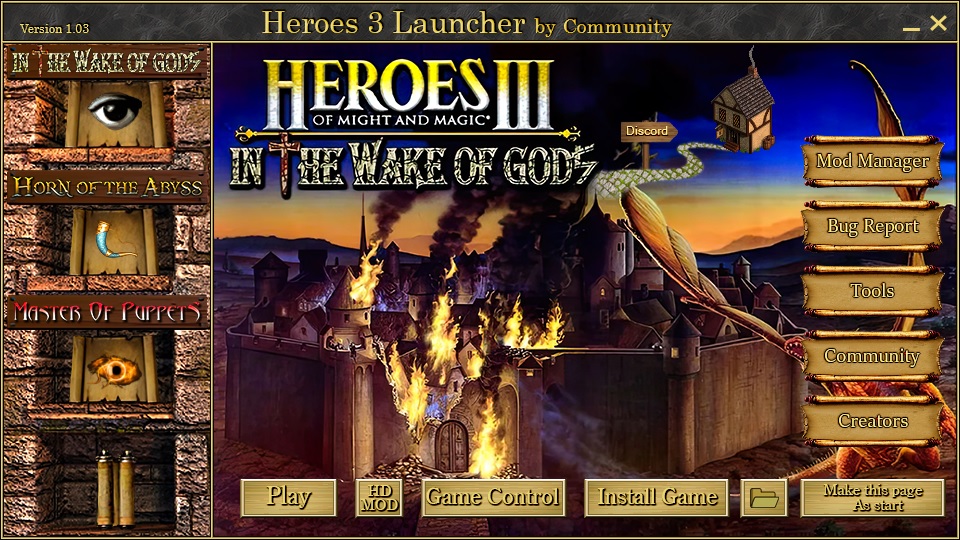 [+] Updated ERA core to version 3.9.3+ – thanks to Berserker;
– added support for png images from zip archives even without the pcx resource of the same name;
– fixed crashes when a player attacks a player in TCP/IP mode;
– fixed shortened description of scenarios in the map selection menu;

[+] For the “Max secondary skills” option, the default value has been changed from 10 to 12 – thanks to Archer30;
[+] Added compatibility of mod options “ERA scripts” and “Wog scripts” to change creatures, like “Rebalanced Creatures” – thanks to Archer30;
[+] Now the “Tyrant” option looks for the first matching player color, not just pink – thanks to Archer30;
[+] Improved the description of creatures on the map with more than 1000 in the squad;
[+] “Mortal heroes” now have the correct specializations when moving from one campaign map to another – thanks to Archer30;
[+] Now the options “Find the Path” and “Double movement for all heroes” change the movement points in the native way for the game, excluding any bugs and glitches – thanks to Archer30;
[+] option “Growth of armies by 4% per day” is now limited to 100,000 instead of 10,000;
[+] changes from the “map rules” now work from the start of the map and correctly change the parameters of creatures;
[+] Completely rewritten options “Medicine” and “Health Artifacts” at the in-game level;
[+] The “New mana recovery system” option has been completely rewritten, a visual bug of disabling mana points in a magic well has been fixed;
[+] Added support for “advent.txt” file for reading by functions;

[-] Disabled “mines” and “quicksand” in vogue garrisons due to internal problems with determining the owner;