More than 3 months have passed since the last Advanced Classes Mod update so it was time to release all the little fixes and changes that have pilled up before Christmas holidays. While there is no major new content update like the commander classes this time, still there are a couple of new things. Commander classes by the way, I don’t know how you feel about them, but up to this point, I have not managed to try out every possible hero, commander and class combination available. I must say that this element really enriches the gameplay a lot and is definitely something that could be expanded further in the future.

I now managed to fix all problems with the secret commander class and if you haven’t managed to unlock it up to now you can keep an eye on the tavern and what the bartender has to say about that.

With this 1.073 update, the Difficulty-Mod has received a major new feature which is called Stack-Experience rebalance. This project is still under development and will be for some time. The aim of this project is to tune down most of the experience bonuses the creatures receive. Once ready it will be a fully customizable feature that will allow you to play a tuned down game close to H3 vanilla stats but with the Stack-Exp feature enabled. Each creature will only get one significant ability at the ace level and not 5 or 6, as it can happen currently. I started to rework all creature abilities of my favorite mod: The Third Upgrade Mod by Maiko, later I will include all H3 and WoG creatures as well, but it takes some time.

You should not activate this option if you are so used to having double-strike on all units and you can’t even tell if this has always been like this or was a WoG feature. It really is mostly a big nerf on everything. –RerryR 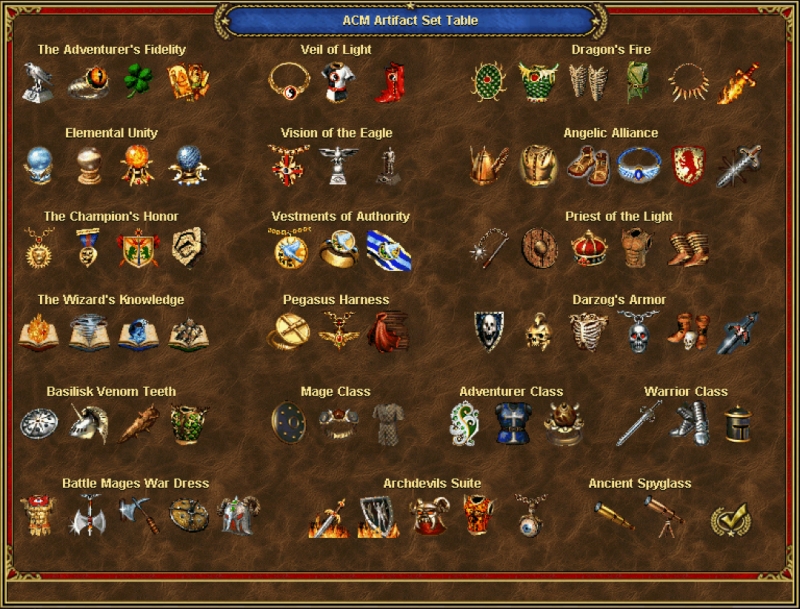 New:
+ AI will now use commander classes
+ right click artifact backpack to get overview of all artifact sets (Thanks to Kongsuni)
+ Changed description of some sets, now it is clear if an artifact gives magical or physical crit chance/ crit damage
+ New Option to revert back to old Diplomacy (no reduce in aggression value)
+ Resurrection and Animate Specialists can now multicast their spell (+1 cast for every 12 levels)
+ Added Alamar and Thunar as Summoner Specialists
+ various tweaks to starting skills for heroes Jeddith, Cuthbert, Oris and a few more (thanks to Dreamaster)
+ Now all heroes regenerate 2 spell points daily as default
+ Renabled a couple of WoG/ES options that were previously blocked (around 10 options)
+ added a lot of descriptions for commanders mechanic when right clicking Commander Class name in bonus list
+ WM Upgrade Treatment now shows given gold per combat
+ Overheal Upgrade now gives Battlelog entry

Dif Mod:
– New option to increase monsters aggression by +1 or +2 or +3 (with 33% chance each) (now as separate option)
– New Option: Stack Experience Rebalance: Removes most OP or unnecessary stack abilities from all new TUM monsters and WoG units, leaving them only with 1 important skill at ACE level. Reduces all other stack exp values aswell
– Updated Mixed Neutrals configuration with monsters IDs from TUM 2.16
– Battle Commander gains +20% health when playing with TUM