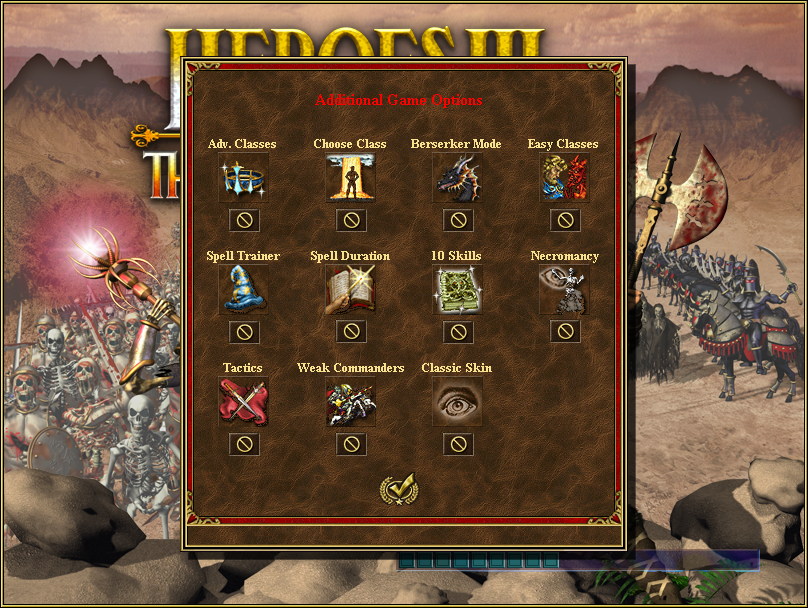 Advanced Classes mod is a huge gameplay improving mod developed on the ERA platform and based on the Wake of Gods.

The core of the mod is new class and skill system for Heroes. To avoid bugs nearly the complete WoG mod has ben rewritten. Making ACm very stable.

Don’t forget to enable the AC modification in Mod Manager.

[+] Updated HD mod mod to version 5.2 R60 – thanks to Baratorch;
[+] Now it is possible to buy all the War machines at once in the blacksmith on the adventure map with the “War Machines 3” option;
[+] The following features have been added to the “Game Enhancement Mod”:
[+] Added new graphics for checkboxes and elements of radiant dialogs – thanks to Grossmaster;
[#] Empty elements are filled in hotkey help;
[#] Fixed resetting War Machines when replaying a battle with the “War Machines 3” option;
[+] Updated ERA to version 3.8.9 – thanks to Berserker;
[+] Updated HD mod mod to version 5.2 R59 – thanks to Baratorch;
[+] Now tweaks are enabled by default, creating unique saves for each map; = 1= 1= 1
[+] Added initialization of z1 to “54 wog – enhanced dwelling hint text.erm” to prevent possible problems with dwellings.dll – thanks to Archer;
[#] Fixed a bug that occurred when hovering over a phantom hero;
[#] Fixed random and frequent crashes caused by missing files for the “Night Scouting” option (Finally!);
[#] Fixed a bug in the “Henchmen” option that occurred when the AI tried to install an empty Henchmen;