Mysterious Cave has been added to the Third Upgrades mod in version 2.8.5. Events change every week. You can locate Mysterius Caves by pressing F2 key. 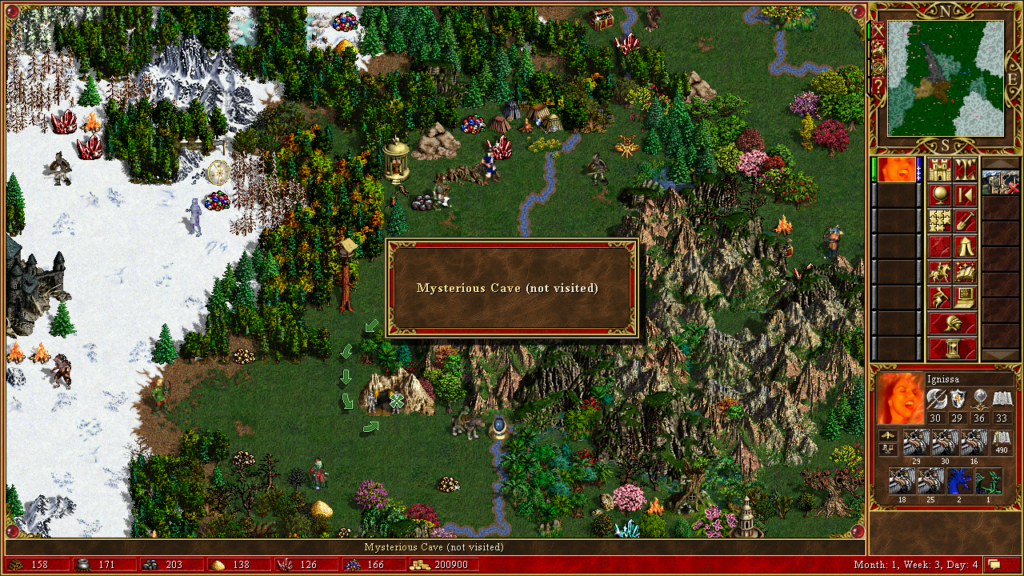 -Critical Bug about Warehouses was fixed.
-Soul Eater commander casts was Fixed.
-Fixed name of the some creatures.
-Reclassified combos artifacts, they will no longer appear on the map or in rewards.
-Most CBs can now be revisited, most in 14 days, others in 28 days.
-Fixed Diamond Dragon/Darkness Dragon has no spell resistance.
-The unnecessary double attack of Stack Experience on Seraphs has now been changed to “No retaliation”.
-Windmill was be removed from the replacement list of warehouse.
-Fixed damage on Dryads.
-Orb of Chaos and Compendium of the Magic had a rebalance.
-Ultimate Dragon Utopia was Balanced.
-Small balance in the rebirth of Divine Phoenix.
-Primal Faerie Dragon now has Expert “Magic Mirror “and Basic “Anti Magic”.
-Mod priority increased by +2.
-Optimized the magic damage of Primal Faerie Dragon.
-Optimized all my creature banks for battle replay.
-Dragon Treasury has been replaced by Dragon City.
-One new compound dwelling: Black Tower (it’s not manageable in Map Editor due to a limitation in its object naming)
-Add new soundtracks in the mod.
-NEW!: Added Mysterious Cave. (It’s a cave with the events of the mod “Adventure Pillars”).
-3 new artifacts now have effects and are now available in the game.
-Fixed crash when ghosts appear in death chamber.
-Fixed Troll Hag and Troll Witch don’t shoot correctly in animation.
-The crash caused by right clicking on an empty slot in the backpack has been fixed.
-Fixed backpack button in wrong position.
-Changed the object replacement of some CBs for better passability.
-Redesigned Forbidden Cliffs (Old design was very unsightly).
-Removed automatic enablement of “New Artifacts” script.