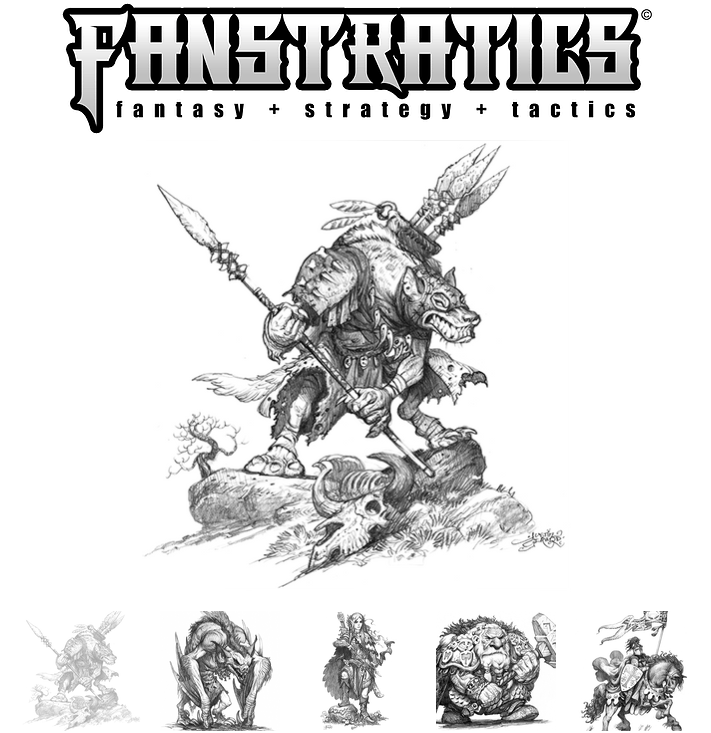 This month’s Fanstratics troop concept sketch is the Gnoll Spear Thrower. For those of you who find art production interesting, Justin showcased his rendering the Gnoll via this Twitch stream.

This first faction should be unsurprising to most. They are the Allegiant; loyal, faithful, and steadfast in devotion. Inspired by medieval Knights, and their chivalric code, this predominantly Human faction makes their homes on the Grasslands. Despite having a moderate lifespan, they are the eldest culture on the continent, and oddly predisposed to forgetting older life lessons. Anyone familiar with the ‘Castle’ from HoMM3, should feel very much at home with the Allegiant. Currently, the Troop representing this faction is the Cavalier.

Is Fanstratics connected somehow to the lore of M&M or H3 series, or it will be a completely different universe?

Ubisoft owns the legal copyrights to Might and Magic and Heroes of Might and Magic, so I have no choice but to place Fanstratics (FST) in its own unique universe. In previous newsletters, I described Fanstratics as ‘different but familiar’. It will look different, with different characters and different lore, but anyone who has played HoMM3, should feel very much at home with its game play mechanics.

What features of Heroes III were cancelled before release?

Truthfully, other than the controversial Forge faction, I would say 99% of what I wanted in the game… made it into the game. I don’t honestly remember cutting anything of real significance. When we shipped HoMM3, I was satisfied with the work we had done. Is there room for improvement and evolution? Yes. This is what I am attempting with Fanstratics.

How many different types of resources are planned for ‘Fanstratics’?

Six resources are planned: Timber, Ore, Crystal, Incense, Quicksilver, and Gold. I trimmed the original seven down to six, with the intention to create a natural symmetry, and more rare resource competition, between FST’s 9 factions.

Why did you decide to develop a new game now, 20+ years after the release of Restoration of Erathia?

This is a big question to answer, but I will try to be concise. When I left game development, I was burned out and unhealthy from years of stressful working conditions and crunch. I tried other professions, specifically, writing, stock options trading, and ultimately… foreign currency trading. It took years to learn how to profitably trade the currency markets, but once I figured it out, I suddenly had spare time on my hands. With this extra time, I began to crave a return to computer game development. Slowly, I started to reawaken my game design skills, when disaster struck. My foreign currency broker collapsed… and I lost everything. I no longer had a choice. It was ‘game dev or die’, and Fanstratics is the hill on which I have chosen to fight.