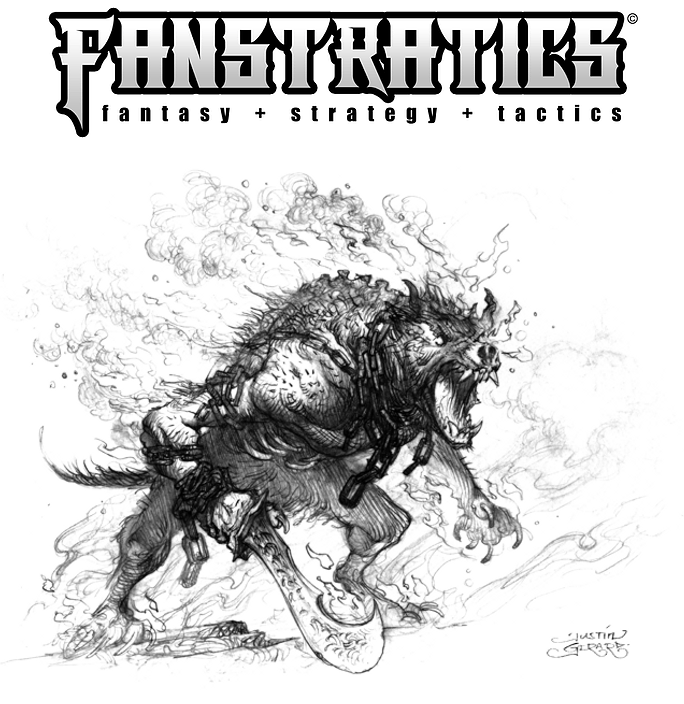 Fueled by inner fire and external hatred, the Hell Hound is a mid-tier Troop of the Infernal faction. These demonic lycanthropes can set an enemy division ablaze with their assaults, while their Hellish Howl can drain the fight from an entire enemy army.

Then Justin delivered his first thumbnail for the Hell Hound, it was a stereotypical… four legged… Hell Hound. It looked great, but I’d asked for an anthropomorphic Hell Hound (a demonic lycanthrope). Justin has been rather busy these last two months, with numerous art-related and unrelated tasks, so the miscommunication was understandable. When I pinged him a second time, and refreshed his memory, he promptly delivered a follow-up thumbnail, which dramatically blossomed into this month’s Troop.

As good as the Hell Hound reads in black and white, I expect this particular Troop to look significantly better when fully realized in 3D with accompanying special effects.

When I was hashing out the campaigns for Heroes 3, my objectives were simple.  Keep it short, simple, and to the point.  Limiting campaigns to 3 or 4 maps accomplished a couple goals.  First, more players were more likely to finish a campaign if it was short.  Second, a collection of short campaigns created the opportunity to showcase individual factions, which gave a player the opportunity to experience HoMM3 in full.

When I began outlining the story for Fanstratics, I must admit, there was a pull to tell a longer, more involved story.  So, in the end, I decided there would be 2-3 Campaigns, each comprised of at least 8 maps.  It’ll take more work to weave various story elements together, but unlike HoMM3’s development, I have more time to accomplish this aim.  Time permitting, there will be three campaigns.

As for solo maps, my intention is to deliver a quantity similar to RoE… ~45 solo maps (most of which can be used for multiplayer).

Two map makers, who previously worked on RoE, AB, and SoD, have reached out to me about making maps for Fanstratics.  I told them, when the FST Map Editor is far enough along, I’d be in touch.  Truthfully, I’m considering reaching out to some members of the HoMM3 Map Making community, as some of the non-commercial scenarios are quite wonderful.