We proudly present to you the last version of Advanced Classes Mod. I know the wait has been long but it is a worthy last update I would say. We tried to polish and improve all the little edges that still remained in the previous versions. The mod can now be considered complete. Because of the positive feedback I received over the last months, we put extra effort in creating this last update. I had great help from Daemon_n and Sandris they produced fantastic graphics which you will notice immediately when you start the mod. – RerryR (mod author) 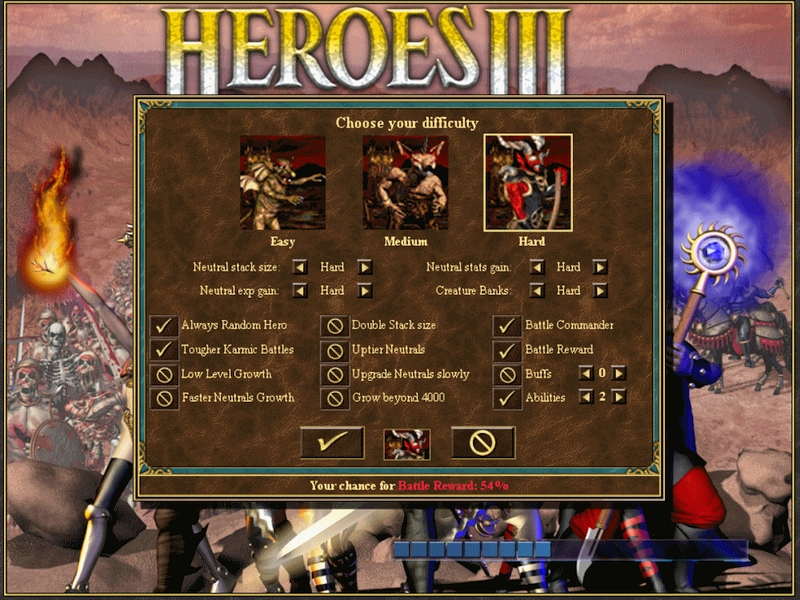 New in 1.05 is the completely reworked interface of the Difficult Mod as you can see in the picture above. I started this project together with Daemon at the beginning of the year. ERA now has a fully customizable and easy to understand mod to adjust your gaming experience vs the computer player. All options have descriptions when you right-click them. This mod will also be released as a standalone.

It is now possible to buy new Upgrades and Enchantments for all your Warmachines in the town by right-clicking the Blacksmith and the Mage Guild. Most of these new upgrades require your hero to have knowledge of a certain secondary skill. So it will not be possible for a hero to buy all upgrades. This will increase replay value and strengthen certain skills because they give you acess to powerful enchantments. Both the Blacksmith as well as the Wizard living in the Mage Guild will great you with sounds I imported from Might and Magic 7. All factions have a different sound. These guys will even start to insult you when you don’t buy upgrades, so better go shopping with enough money in your stash.

When you start your game you now have the choice of several gaming options:

All options have an ingame description. Especially the “Easy Class” option you’ll appreaciate because it allows to play a less strict game in regards to the secondary skills you have to choose.

Advanced Classes Mod is the first Heroes 3 mod that offers a skin pack you can choose at the game start. Freely choose between class skill icons from between version 1.04 and 1.05. Both look great in my opinion. Many thanks again to Sandris, he put a lot of work in these icons. His art style is now immediately recognizable among the H3 modding community.

The Spell Trainer option allows you to train your spells by using them in combat. The effect is now displayed in your spellbook as well as the times you cast this spell, this gives a much better immersive feeling. Spell damage in your spellbook is now also correctly updated. This updated damage includes all sources like from artifacts or Grandmaster skills.

Reworked Secondary Skills
back to basic and close to original H3 mechanics. Some secondary skills have been reworked to better fit in the game, like Learning, Pathfinding, Luck or Necromancy.

And now?
I will continue to provide support for this mod for all upcoming ERA versions and I will fix all bugs reported to me. The work on this mod was massive, Iam sure it were several thousand hours of work time. Overall it contains nearly 30000 lines of ERM code this is nearly as much as the total of all WoG scripts combined. In fact, I have rewritten nearly every worthy WoG script/option. This has taken 4 years to complete. The mod can be played in 4 different languages, which is a lot, considering the amount of text that needs translation.
All people helping me with translation have received the release version beforehand, so we can expect a Russian, Korean and Chinese version soon. 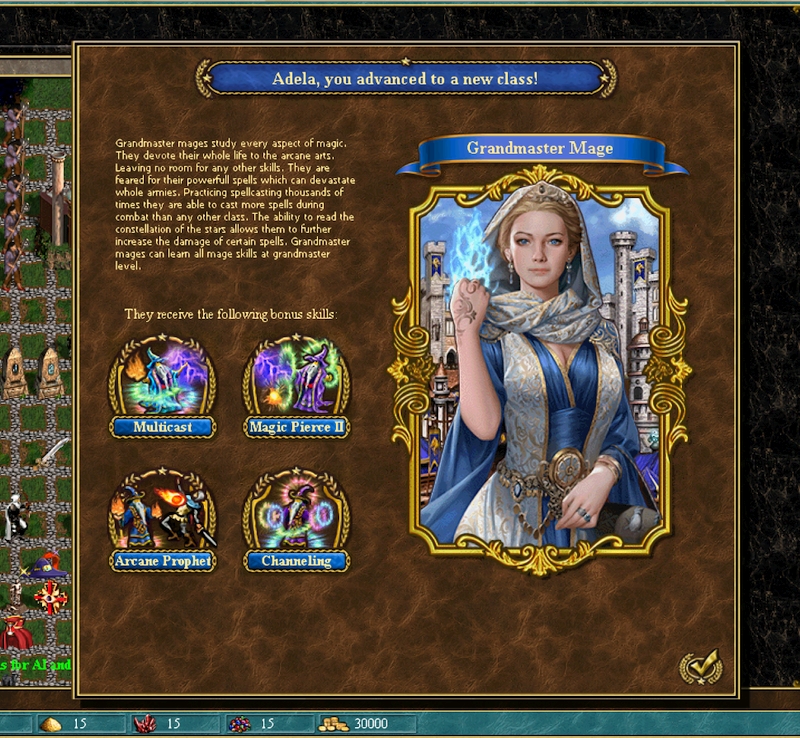 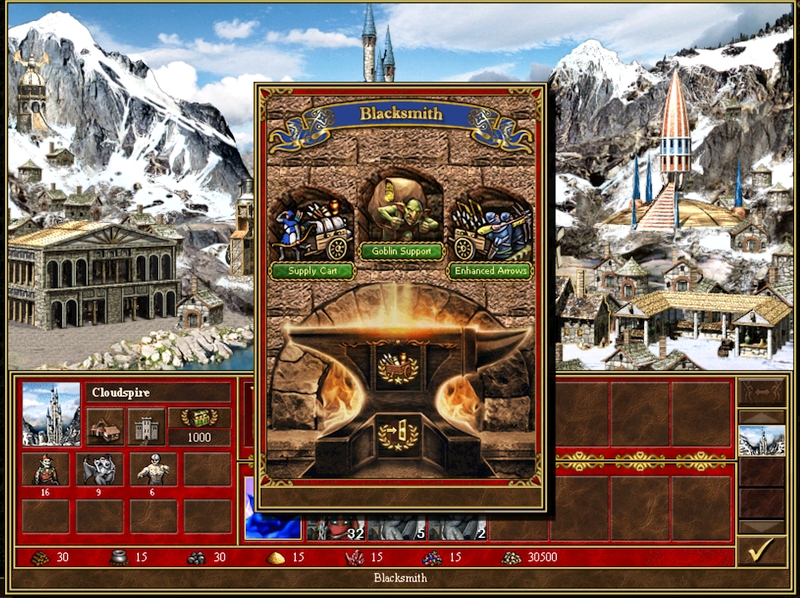 Balance:
– The computer player will now pick skills much more carefully to teach advanced classes. Prepare to see more Master and Grandmaster AI players.
– Pendant of Free Will chance to Hypnotize reduced from 7% to 5% in melee and 3,8% when shooting and added check for Mind Spell Immunity
– Ballista Specialist and Ballista Commander reduced base damage gain per lvl for artillery
– reduced M/GM Summon elemental growth and duration to 1 round (each summons elemental cast still resets timer but is now harder to abuse)
– increased chance for scouting events again and fixed a very rare ctd when getting wrong creatures from event
– Archery and Armorer now only give 7 Warrior Points instead of 8
– increased costs for Diplomacy creature to join by +50% (they still cost no additional res)
– increased the Health of Battle Commander and lowered his damage
– Battlemage now reduce fixed -10% HP
– Druids blocked reduced to 4*Hero Level
– Removed FirstShot/Magic Block and Warcry message at battle start
– disabled “Enhanced Commander Artifacts” because they can give SS what is not intended.
– disabled “Magic Mushrooms” because they can give SS what is not intended, also you would not forget the Magic skill after one week
– increased damage/SP scaling of Inferno, Fireball, Ice Lightning, Firewall and Landmines
– Increases scaling of Fire Shield SP based damage
– little improvements with Master Clone and Cure and First Aid Tent heal
– speed-reducing mechanics are now capped at min 2 speed and not 1 (except slow cast)
– greatly increased the power of AI commanders and set their casts to zero
– GM Mage Channeling Ability now works with max mana equal or bigger
– Precast from Battlemage damage increased
– All heroes now start with their factions commander again. Let them find out by themselves what is op. 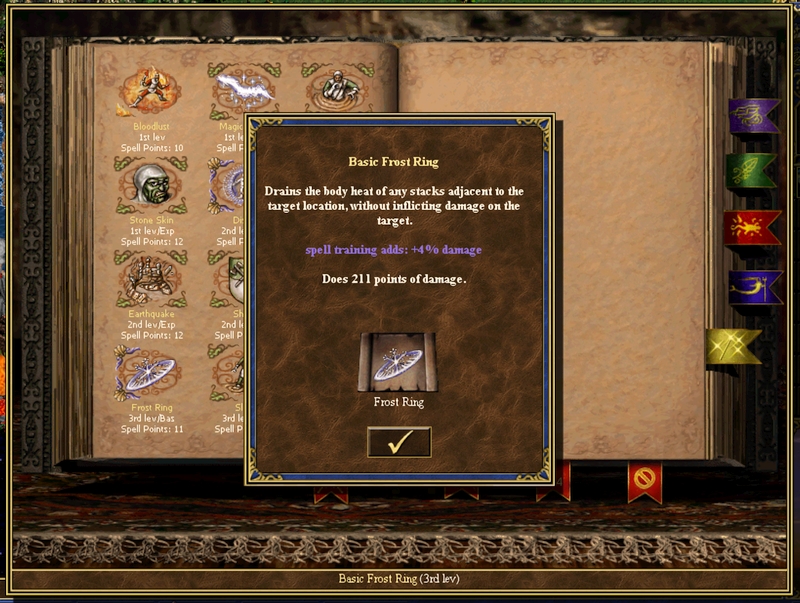 Misc:
– Dls can now be skipped with pressing “Enter”
– Update readmes files
– changed all BA0 and BA1 trigger to OnBefore/AfterBattleUniversal for better MP support
– Implement the Third Upgrade Mod option for commanders so both mods work together. Thanks to VMaiko and Majaczek
– Added HotA fonts to pac file for increased text fields
– Added switching actions.erm by Xericsin because it is better than what I have. But needed adjustment for Conflux Commander.
(Use keys 1,2,3 to switch between melee, shooting, casting)
– Formatted comments in code thanks to “Alt+F”
– updated FUN.erm
– Added limit to creature bank growth to prevent overflow for games >10months. Limit is 500k troops per stack.
– cleaned .pac files

Fixes:
– fix Now AI is able to become GM Warrior.
– fix disabled “Extra Abilities” option due to bug (in Difficulty Mod)
– fix problem with Master Firewall and Master Landmine scripts (continues animation)
– fix possible crash with Hunter-class and certain battlefields
– fix crash when clicking on Kingdom Overview (temporarily disabled)
– fix Ring of the Magi gives no extra spell damage
– fix possible crash when replaying with BU:R (now Battlefield grid will look not so nice in the first replay round)
– fix important bug with primary stats when certain heroes had Armageddons Blade equipped
– fix critical bug when Precast would hit Arrow Towers during a siege(thanks to kongsuni)
– fix M/GM Intelligence for Heroes in Towns points regeneration
– fix Sorcery heroes would sometimes forget their spells after combat when playing as a defender (finally ^^)
– fix Eagle Eye learning spells in combat would not be remembered when playing as Sorcery Specialist
and more fixes ….

It is very likely that there will be a 1.05f (fixed) version because the transition to ERA 3 and the amount of added code and last-minute changes always lead to a few unnoticed errors.